Was the “pivot to video” as misguided as everyone says it was?

It would be difficult to pinpoint the exact moment when the infamous “pivot to video” actually began, but a 2016 Facebook earnings call could certainly be cited as having thrown gasoline onto the fire. “I want to start by talking about our work around putting video first across our apps,” said CEO Mark Zuckerberg. He went on to predict that, within five years, video would be the dominant form of content on the internet. By enabling this shift, Facebook was “taking steps to make it even easier for people to express themselves in richer ways.”

Sure enough, publishers began to notice that their Facebook video views were skyrocketing, and this also coincided with the industry-wide recognition that the Facebook-Google duopoly was running away with the digital ad market, vacuuming up nearly all the new ad dollars that were migrating online. Before, publishers assumed that they could claw back some of this market once they reached some as-yet-defined level of scale. But by the time Zuckerberg made those infamous proclamations about video, the publishing industry had resigned itself to the reality that no amount of scale would result in publishers outmaneuvering platforms with billions of users and self-service ad targeting platforms.

Video, they believed, held more promise. Not only were there all the rosy predictions about how video would eventually subsume the entire internet, but publishers knew the big platforms weren’t interested in developing it themselves, and that the expensive nature of the medium meant that your average, everyday Facebook user wouldn’t be uploading videos at the rate that they posted status updates and baby photos.

We all know what happened next. News orgs started laying off text-based reporters by the hundreds while simultaneously releasing staff-wide memos claiming that these layoffs didn’t represent a retreat, but rather an aggressive expansion. Video producers were hired in droves, publishers began issuing press releases about the “billions” of views they were generating on Facebook, and BuzzFeed wrapped a bunch of rubber bands around a watermelon.

The euphoria was short-lived, however. Those billions of Facebook views didn’t lead to billions of dollars, and, as it turned out, the view counts were inflated anyway. Mashable was unloaded in a fire sale. BuzzFeed missed its revenue targets. Vice’s outlandish VC valuation cratered. The death knell of the “pivot to video” era came in October when a group of advertisers filed a suit alleging that not only had Facebook been falsely inflating its view counts for videos, its executives had known of the discrepancy long before it was disclosed to the pubic.

This triggered an industry pile on, aimed at both Facebook and the very publishers that had hastily discarded their text reporters. Writing for The Atlantic, Alexis Madrigal estimated that 350 people had lost their jobs as part of this industry-wide realignment. In a Wall Street Journal article, insiders blasted publishers for their callous naivete. As one editor put it, publishing executives “all felt like this pivot to video was something that was being pushed on us that we didn’t have the data for.” Even if Facebook was inflating views, every media company could see, plain as day, that the revenue wasn’t materializing.

The entire consensus these days seems to be that the “pivot to video” was a monumental mistake, a bet on empty calories and widely-inflated revenue projections.

But was it a mistake? I’m not so sure. Because if you look at the actual trends across web video, streaming services, and linear television, there are some clear trend lines indicating that there may be a pot of gold at the end of the rainbow. And some enterprising publishers are still in the running to earn that pot once its materializes.

Let’s start on the advertising side of the equation.

There’s a reason that the rise of television in the mid-20th century resulted in a titanic transfer of advertising dollars from print publications to the living room screen. Video as a medium is unmatched in effectiveness for brand advertising, and as more and more video viewership migrates online, so will advertisers.

Where will this ad growth come from? Largely from the TV market, which currently generates around $70 billion in advertising revenue a year. Recent surveys from IAB found that about two-thirds of advertisers plan to shift at least some of their TV budget to online video over the next year, and they often cite the fact that this kind of video “reaches an audience that can’t be reached on TV.”

Globally, online video advertising is expected to reach $32 billion this year. While this represents a relatively small portion of the estimated $273 billion in global online ad spending, just about all future revenue growth will go to video, especially mobile video. Forrester forecasts that about 72 percent of the growth in online video advertising will be on mobile. This trend mirrors the overall use of mobile video, which grew from 29 percent share of online video viewing in 2016 to 55 percent in 2017. People are growing increasingly used to watching video on their phones, and brands want to reach them there. 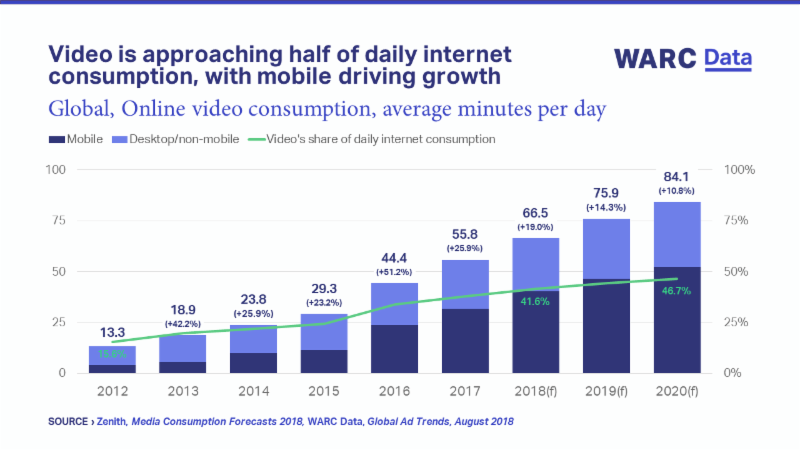 And that’s just the advertising side. Now consider the growing tide of OTT subscription video apps — from Netflix to Hulu to Amazon Prime — and that many of the “pivot to video” digital publishers are now regularly selling entire series to these platforms.

Just last year, these OTT streaming services generated $20.1 billion in revenue, according to PricewaterhouseCoopers, and that number is expected to grow considerably. It’s forecast to grow to $30 billion by 2022. Another source projects that OTT could reach as high as $129 billion by 2023.

Much of this growth will come at the expense of traditional cable TV, which is absolutely hemorrhaging subscribers. S&P Global Market Intelligence’s Kagan research group estimates that the industry lost 1.2 million subscribers in just the third quarter alone.

And that’s just the beginning; there are some signs that the industry is, at the moment, careening on a downward slope, with the cliff still on the horizon. For evidence of this, look no further than the viewership ratings for children’s television, which are down a whopping 20 percent, year over year, more than any other TV category. Younger viewers have eschewed cable and are consuming nearly all their content on platforms like YouTube and Netflix. Once this age demographic reaches adulthood, there’s a good chance it’ll be the end of the cable industry as we know it.

So how does this growth in OTT platforms translate to money paid out to content creators? Well, just consider for a moment the content budgets for some of the top platforms, many of which are turning to outlets like Vox, BuzzFeed, and Vice to develop ongoing series.

Netflix was original projected to spend $8 billion on content this year, but recent estimates have been revised upwards to $13 billion. Amazon is dishing out an expected $5 billion while Hulu is paying a smaller-yet-still-respectable $2.5 billion. Then there are the new entrants: Apple, for instance, has set aside $1 billion, with 24 series and two films already in the works. And Facebook Watch is footing the bill for $1 billion in content — an irony given how much the company is blamed for the industry “pivot to video.”

That’s over $22 billion spent on content this year. If you’re a digital publisher pitching a series to these platforms, that number represents a substantial opportunity to make money. And those are just the biggest players.

So what does this all mean?

That the “pivot to video” wasn’t a disaster for everyone involved, and that those publishers that execute it well could reap tremendous benefits. The problem, as I see it, was that so many publishers rushed into it before the market had fully matured, Even worse, many of these very publishers weren’t actually all that good at making video beyond what performed well with Facebook’s auto-play features. As it turns out, this kind of video produces plentry of passive views but doesn’t engender much in terms of viewer loyalty. Without loyalty, the longterm revenue prospects are low.

Yes, the “pivot to video” does deserve some mockery, but it shouldn’t be completely dismissed as a dead end. With $70 billion in TV advertising just waiting to be unleashed online, there’s a lot of money to be made for those poised to capture the coming deluge of new viewers.

Related:  NewsWhip announces the launch of the Social Research Center